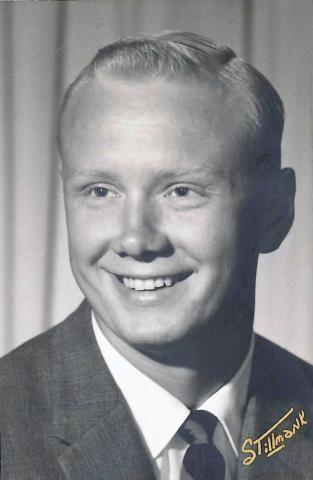 The following is a special tribute to our mentor and Chairman of Heck Capital. We appreciate Bob was able to live a long and fruitful life until his passing at the age of 85. As much as we want to recognize his business accomplishments, we also celebrate his giving character towards others, and his dedication to his faith, family, and community.

Robert George Heck “Bob” passed away peacefully Friday January 7, 2022 surrounded by his family. Bob touched the lives of many and will forever be missed and appreciated. Bob was an incredible husband to his wife of 60 years, June. Bob and June’s loving relationship began with the flip of a coin. After losing the coin flip for a double date, Bob took June to see the movie, The Ten Commandments. They soon after fell in love. Bob was an amazing father to five children, and is cherished as “Bapa” to 19 grandchildren, and one great grandchild. Despite many health complications since birth, Bob’s passion for life, giving back, and helping others whenever possible kept him going. We called Bob “The Machine,” as he was the most aggressive, most optimistic, and most dedicated person we have ever encountered. We loved Bob so much and his legacy will live on forever. This dedication was most displayed in his contributions to his business and Rhinelander community. Bob loved Rhinelander and wanted to contribute to progress in Rhinelander and northern Wisconsin. With his lovely wife by his side, Bob was always determined to “give back” to the Rhinelander community with his time, talent and treasure, working to embolden the educational, social, and business infrastructure through leadership and impactful contributions. Bob enjoyed his trips to Arizona and Kohler with his family. Kohler in particular was a special place for the Heck family and Bob had a great sense of respect and appreciation for Kohler. 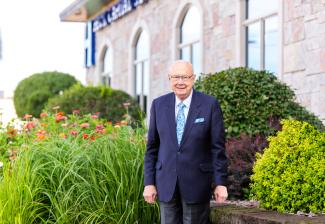 Born in Superior, Wisconsin, Bob moved to Milwaukee, and then Wausau where he graduated from Wausau East in 1954. He graduated from the University of Wisconsin-Madison in June 1958 with a Bachelor of Science Degree in Economics. He started in the securities business in Chicago, with the A.C. Allen Company, before moving back to Wausau in 1959, where he worked with his father, Earl Heck, for A.C. Allen/Marshall Company. In December 1964, Bob moved to Rhinelander and opened up a branch of the Marshall Company with one assistant and held the position of branch office manager and Vice President. From the beginning, Bob was the ultimate salesman. The company eventually changed its name to Smith Barney and Bob grew the office to include several advisors and service associates, eventually forming The Heck Group, with his two sons Ken & David and additional team. In 2007, the Heck Group started Heck Capital Advisors, LLC, an independent advisory firm currently based in Rhinelander, with offices in Milwaukee and Minneapolis, serving clients in 40 states. Bob served as Chairman of Heck Capital Advisors until his passing. He truly valued his client relationships and was proud of so many long-standing clients and friends he worked with, and helped them through multiple market cycles.

Bob was so dedicated to his client relationships and community, receiving multiple honors and recognition: 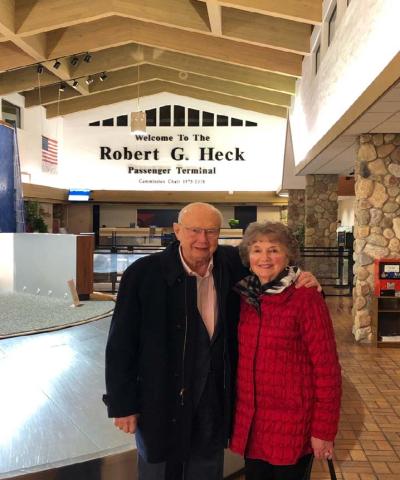 Of the many community initiatives in which Bob was involved, he was most proud of the Rhinelander-Oneida County Airport. He served as Chairman of the Airport Commission since 1975, and oversaw its dedication in 1979. Bob’s quote was: “we either progress or we regress, we can’t keep the status quo.” The newspaper stated: “if Heck didn’t do anything, Rhinelander could suffer a $150 million loss in 20 years as result.” The Rhinelander-Oneida County Airport was built from many hours of dedication by Bob, working on the community, state, and federal level for funding and grants for building and maintenance. The airport continues to thrive today. After Bob retired from Commission Chair in 2017, the Rhinelander Common Council named the terminal the “Robert G. Heck Passenger Terminal” on April 8th, 2018, which was one of Bob’s proudest moments. Bob loved to say, “Heck International” and was so proud of the benefits to the Rhinelander community that the airport provided. He often repeated that one could fly out of Rhinelander and be anywhere in the USA by noon and anywhere in the world within one day. Bob always said: “Airports build cities, cities don’t build airports.” The benefits continue to be tremendous with over 200,000 people using the facilities each year and an estimated economic benefit of over $400 million since its dedication. Bob received multiple recognitions, including the 1976 Wisconsin Aviation Award, and the 2004 Lifetime Service Award from the Wisconsin Airport Management Association. In 1984, June 2nd was named “Bob Heck Day” for all of his efforts related to “Heck International.”

“The Machine” tried to retire at 65 and actually had a retirement party from the business, and stepped down as Chair of the Airport Commission in 1984; yet he went back to both soon after. In fact, at age 70, Bob was rejuvenated by working with his sons, son-in-law John Reinthaler, and entire employee team, whom he dearly loved and appreciated, while starting a new business: Heck Capital Advisors.

Bob also encountered many health issues. At age 25, Bob had open-heart surgery. Bob and June were advised to cancel their wedding plans and were told he would not live past 40. At 43, Bob was diagnosed with cancer in his knee and was not expected to live. We continue to believe in a miracle cure. Bob had pneumonia nine times and then was advised he would not live through another recurrence…he never had it again! “The Machine” kept going. 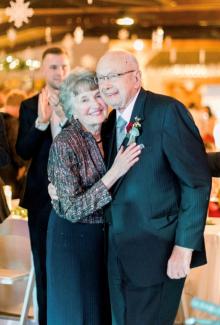 Despite multiple health issues over many years, Bob’s goals were to get to his 85th birthday, 60th wedding anniversary, Ryder Cup, weddings of two grandchildren, Mitchell and Caryn, and Christmas Eve in 2021, all of which he accomplished while treasuring his final family moments together.

Of all the business and community initiatives Bob was involved in, it was his faith and the togetherness of his family that were the most important. Bob was deeply dedicated to his church and served as Chair of the Finance Council for Nativity of Our Lord for 45 years. He constantly supported building improvements, upgrades, and weekly support. Bob also quietly helped so many charities and families behind the scenes. He consistently gave of his earned income, time, and efforts in many ways. A firm believer in staying optimistic no matter the obstacle or setback, Bob had two sayings: “All For Thee My Lord” and “Kick Ass“. Bob’s faith and dedication to the church were steadfast up to the day of his passing. His family spent countless hours praying together and will forever remember Bob’s commitment to put faith and family first. The loss of a coin flip turned out to be the greatest moment for our family as God brought Bob and June together. Bob loved spending time with June and they did everything together: church, family, community. Bob loved his business, clients, team, family, and June. Bob will be forever missed, but his legacy will live on forever. Bob was a role model to many, especially to his children and grandchildren, who will continue to carry on his legacy and love of all things faith and family.